To understand this tutorial, I assume that you are already aware with Spring MVC and how it works. I will demonstrate here a simple Ajax call in Spring MVC where form data are posted and sent to the controller. The output of the ajax call is plain string text. 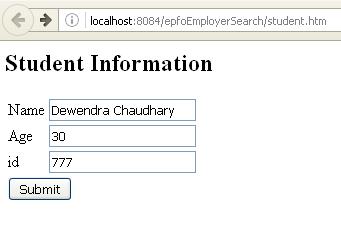 Create a jsp file with name studentForm.jsp and add the following code:

The first method in the controller loads the form and the later one is executed when the submit button is clicked.

In this step data binding takes place which helps to bind the form data and transact via the controller. You must have already done this step while implementing spring custom controller. Create file Student.java and paste the following code:
package com.StudentController;

Finally, run the project and call the student form by typing localhost:8080/project_name/student at the address bar of your browser. Fill some data into the form fields and there your are.

The Java plug-in for web browsers relies on the cross platform plugin architecture NPAPI, which has long been, and currently is, supported by all major web browsers. Google announced in September 2013 plans to remove NPAPI support from Chrome by “the end of 2014”, thus effectively dropping support for Silverlight, Java, Facebook Video and other similar NPAPI based plugins.

As of Chrome Version 42, an additional configuration step is required to continue using NPAPI plugins.

If you see a message within Chrome that says Java(TM) needs your permission to run, you will need to respond to the Chrome options in order to run plug-ins on the page. Options vary according to the version of Chrome.

Look for the blocked plug-in icon in the Chrome address bar. Clicking on the icon will display Plug-ins were blocked on this page and plug-in options

In addition, you can manage permissions on a site basis through the Manage plug-in blocking option.

If you see a message bar within Chrome that says Java(TM) is required to display some elements on this page, click on Install plug-in in the Chrome message bar, or download from java.com.

Plug-in out of date

If you see a message bar within Chrome that says Java(TM) was blocked because it is out of date, click on Update plug-in in the Chrome message bar to get the latest Java.

After upgrading the earlier versions of Chromium browsers to later versions greater than 42, internet users have started complaints that the JAVA plugins are not supported by chrome. After a bit research, found that chromium browsers have disabled NPAPI plugin-in on their latest versions. The deprecation of NPAPI plug-in caused the JAVA plugins to be blocked in Chrome.

What is NPAPI plug-in? (Source: Wiki)

It was first developed for Netscape browsers, starting in 1995 with Netscape Navigator 2.0, but was subsequently adopted in Internet Explorer 3 in 1996 and implemented by many other browsers, although some browsers later dropped support.

For stability and security reasons, Google Chrome decided, in 2013, to start phasing out support for NPAPI. As of Chrome version 42, NPAPI is disabled by default and must be re-enabled explicitly. Google intends to remove support entirely in version 45, due in September 2015.

With the deprecation of NPAPI, some developers have asked which modern technologies can be used to implement features which in the past would have relied on a platform-specific NPAPI plug-in. In answer to these questions we have composed the following list of common NPAPI use cases and web platform alternatives.

In general, the core standards-based web technologies (HTML/CSS/JS) are suitable for most client software development. If your application requires access to features outside the web sandbox, myriad Chrome Extension and App APIs offer access to OS features.

A common use case for NPAPI plug-ins on the modern web is embedded video and/or audio. A range of modern web technologies exist to facilitate media streaming.  The basic building blocks are WebRTC and media elements:

HTML5 Media Elements:  The HTML5 Specification provides a rich media platform through the <audio> and <video> elements. More complicated use cases can be achieved using the <canvas> element (for example check out the Video FX Chrome Experiment).

WebRTC:  WebRTC was designed for real time communication between peers and the technology can also be used for applications like live streaming media and data. Google’s Chromecast device uses WebRTC to stream HD video between a browser and TV.

Several features on top of these building blocks support more advanced use cases:

The ability to adapt media streaming to an individual consumer is critical in delivering high-quality content to a large audience. In the past this capability has been provided by technologies such as Silverlight’s smooth streaming and Quicktime’s HTTP live streaming. The Media Source Extensions to the HTML media element provide the capability to adapt a stream to an individual consumer on the modern web. Html5rocks has put together a great example of how to use the Media Source Extensions to implement some of these common use cases.

Several of the most popular NPAPI extensions including Facebook Video Chat and Google Talk provide video conferencing functionality within the browser. With the introduction of WebRTC video conferencing is facilitated directly through JavaScript APIs. The Cube Slam Chrome Experiment provides an example of peer to peer video conferencing via WebRTC.

WebVTT and the <track> element (a child element of <video>) enable web developers to add timed-text captioning capabilities to their HTML apps.

Try the Native Messaging API for Chrome Apps and Extensions.

Native Client (NaCL) provides a rich environment for cross-platform game development. Many games have already been ported to or designed for NaCL. A number of examples and detailed tutorials to get started with NaCL are available on the NaCL development site. The WebGL specification provides a high-performance platform for hardware-accelerated 3D graphics in the browser. Chrome experiments has an entire category dedicated to examples and demos of various WebGL use cases.

Some services have relied on NPAPI-based security techniques.  We recommend switching to TLS or, soon, Web Crypto.

In the past it has often been necessary to write platform specific plug-ins to access system hardware such as webcams, microphones, USB devices, and bluetooth. Direct access to local media streams such as webcams and microphones can now be requested directly from the web via the WebRTC Media Capture specification. Chromium also provides an App API for access to USB hardware and another API for accessing Bluetooth devices.